The Pearls: a Sestina for Elsa

I am standing behind her, brushing the hair of my Big Little Girl,
careful not to catch a bristly tine on her tiny new earrings
(so new I can still see the blue dot of marker on the lobe where it was pierced
at the mall kiosk as a birthday present.)
Today she is eight
and when she is eighty she will still have these cheekbones, this brow.

We drove to the mall together, the car full of many words, with concern in my brow,
trying to prepare her but only working up a full body quiver in her four-foot-two-girl
frame, trembly up on the tall stool so that the kiosk lady shows us her own golden rings, eight
in each shimmering ear, “honey if it hurt as much as you fear, would I have all these earrings?”
Her brave smile a poor echo of my brave smile, we clutched; wondering if this present
was a good idea after all, holding her with my eyes as she was pierced -

one on each side - simultaneously - and my heart was pierced
by her hips rising up against the shock of it, hitting my brow,
wrenching fresh tears but it was over now and she was here, present
with me, tossing the sobs like crystals from her cheeks, fingers quavering up, afraid, a girl,
and not so little after all, somehow with those perfectly round earrings
multiplying the arch of her cheekbones by some unearthly light, she is tragic, at eight

watery smile with all of her weight, at eight.
Walking away with our fingers laced, giggles to cover the places where we are pierced
sucking a lolly she’s chattery, jittered, catching a glimpse of her new earrings
in every store window; I catch a glimpse of her brow
arched to accept her reflection. She is no longer a girl
but the beginnings of someone new, ready to leave this present,

and I am ready to usher her in, rainbow spangled bracelets and all, and present
her with all the promises, the secrets, the worries of womanhood. But she is eight
and I am soon back on my heels, reminded that, at eight, a girl
might not be so ready, though she has already been pierced
by the dreams of uncertain womanhood that will wrinkle her brow
as certainly as it will bring her loud lipstick and violent earrings.

Suddenly embarrassed, she asks me to stop talking about the earrings;
she is tugging us out of range of someone’s hearing and I’m pulled back to the present,
head on the swivel. Not nearly discreet enough, I get an eyeful of urgently serious brow
from four feet high. She pulls me behind a wall of plastic cell phone cases. We wait a full eight
minutes, pretending to have a consuming need for waterproof accessories until we’ve pierced
the time barrier and can safely make our way to the car. This now is my girl.

In the rearview mirror I know I am imagining those little brows plucked, multitudes of earrings
and black lipstick obscuring the girl who made me a mother with her presence.
It is not she who has left the world of eight, but I who cannot stop imagining being pierced.

Every Friday bumping home on the bus
shaking work like a greasy odor
from the tails of my skirts,
I am primed to revert
to the default version of me;
to curl up inside the magenta sponge cake
of your fluttering fingers
that trace secret messages down my
wrist, collar, neck, temple, earlobes.

Your ardor will reassemble me,
just as my reverence
feeds your egomaniacal delusions.
If I could melt into your iris
by reading twelve
more books at bedtime
I would read sixty-four.

Monday I tramp away, mind white;
thoughts of you shaking from my hair
like sand out of a picnic basket.
I mount to the glass doors
that hold the singular white hallway to my desk,
where I will type as fast as I please,
nothing dangling from my elbows
or the tail of my mind.
to stand up unannounced
and maybe go to the bathroom;
to sit in the cold dark
for as long as my phone entertains me,
to quietly curse my computer,
lunge at a falling stack of paper;
push through the lunch hour until I, I,
need a break.

Spin my chair in the echoing expanse,
ceilings snaked with air conditioning,
memorizing the patterns of grey exhaust fins
knowing that no one is watching my face
as though their next snack depended on it. 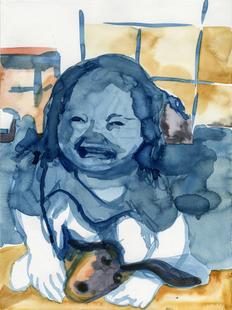 I didn’t fit in when I was eight.
always out of step. overly diffident;
but we find that out later; sometimes too late.

She is not me; she is confident.
Following her one star, she won’t be
always out of step; overly diffident.

It’s a mystery, how she can learn from me.
I only see the pitfalls. I’m not
following her one star. She won’t be

tripping over my power cords. So I plot,
laying my battle lines; I strategize;
(I only see the pitfalls) I’m not

looking much beyond my eyes
I must be raising her different.
Laying my battle lines, I’ve strategized

to help her tread new firmament.
I didn’t fit in when I was eight.
I must be raising her different;
but we find that out later; sometimes too late. 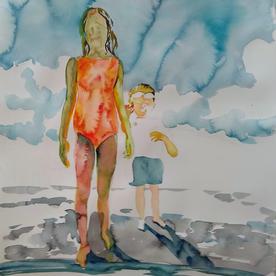 Poem of the Day: 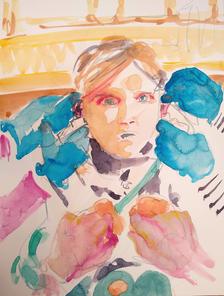 Raising Daughters is written in  a form of poetry known as the terzanelle.

Terzanelles combine two different forms of poetry: the terza rima and the villanelle.